On a recent podcast, a former WWE producer discussed his relationship with Former Intercontinental Champion Sami Zayn. Arn Anderson spoke out about ‘clashing’ with the Smackdown Star backstage. 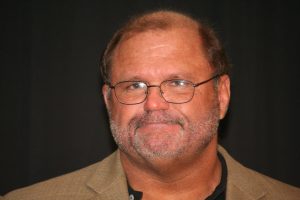 Anderson recently signed a long-term contract with WWE’s rival production AEW. During a recent question and answer podcast, Arn was asked whether he thought Sami Zayn would make a good agent.

Arn was very definite in his answer, it was a resounding no and he listed multiple reasons why not. Apparently the two had many issues when they worked together. Here is what he had to say:

“No. Sami is a little too headstrong. Sami believes in himself but he also believes in his ideas. Maybe it’s because I clashed with Sami. Sami and I clashed quite a few times over what he perceived to be small things, but I always believed the small things are the big things. When you have to help a kid who is fresh from NXT or from somewhere else that comes on the roster, and you are faced with x number of minutes in this position on RAW or SmackDown, as they agent, it is your responsibility to make sure that match is good and it reflects all the rules put in place by the boss, known or not known. You have to be involved in every little aspect of things that in the storytelling process makes sense. In the course of that, you make it to gorilla, and your six minutes went to three. Are you qualified to tell the talent, you just lost three minutes. Here is what you have to take out. There is a lot more than just looking at a guy and saying thumbs up or thumbs down, six minutes. That’s the way it used to be when I wrestled there, thumbs up, thumbs down, and how long you have. There is a lot more involved now. I just don’t think Sami is going to be patient enough or creative enough to be able to come up with a story that is completely different from the one you’ve been talking about all day.”

Sami Zayn made the decision not to travel to shows during the Coronavirus pandemic. This caused WWE to strip him of his Intercontinental Title and create a tournament on smackdown to replace him as Champion. On this Friday’s episode of SmackDown we will see the epic final of AJ Styles Vs Daniel Bryan.

We previously reported that Sami’s decision to stay at home during the global health issue has caused him to have some serious heat with management within the company. Especially since in his usual style Sami took to Twitted to show his anger towards the decision to strip him of his title.

Shout out to WrestlingNews.co  for transcription.