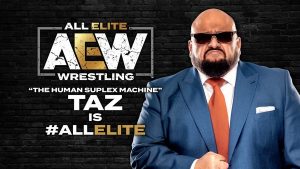 AEW commentator Taz blasted WWE’s Triple H when responding to a comment from a fan on his official Twitter page.

The fan in question had remarked that it was ridiculous Cody Rhodes was on top of AEW’s rankings system and involved in the TNT Title tournament. He then said that select people would lose their minds if Triple H was booking himself on top of WWE’s rankings and putting himself in tournaments.

H has been #1 in their INVISIBLE ranking system for around 15 years! Also, CR puts over talent & doesn’t bury & crush people behind their backs, I can go on forever with this, sir u think u know what the deal is…but u have no idea what u are talking about regarding this. https://t.co/zN2kZoTP49

Firing back at the fan, Taz said that Triple H had been on top of WWE’s “invisible” rankings system for “around 15 years”. Not quite finished backing the AEW star, he added that Cody “puts over talent and doesn’t crush people behind their backs”.

Taz was obviously annoyed by the comment and the tweet ended with him telling the fan, “Sir, you think you know what the deal is, but you have no idea what you are talking about regarding this”.

The dude getting hot about Cody was just another victim.

In all seriousness, it is newsworthy stuff that one of AEW’s lead broadcasters would shoot on Triple H so publicly like this. The “doesn’t crush people behind their backs” line is of particular interest; Tazz’s WWE push was abruptly halted mere months into his run and coincided with a loss to Triple H on SmackDown in 2000.