WWE fired Hall of Famer and long-time producer at the beginning of 2019. The company released Anderson from his contract for allegedly letting Alicia Fox perform in a match while intoxicated. Anderson then served as a road agent for a while but later admitted he did not like the hours. 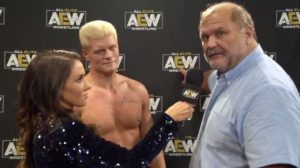 At AEW All Out last August Anderson Debuted for the company by nailing Shawn Spears with a spine buster to help Cody during a match. Since then Anderson has regularly been seen on AEW as Cody’s advisor and manager. He has also supported other Nightmare Family members QT Marshall, Dustin Rhodes and Brandi Rhodes.

Last night on Twitter, shortly after AEW Dynamite aired, the company announced that Arn Anderson had signed a new multi-year deal with the promotion.

SOCIAL EXCLUSIVE
We at #AEW are proud to announce that @TheArnShow has signed a multi-year contract with All Elite Wrestling.#ThankYouArn for calling AEW your home. pic.twitter.com/fWOMWogWS6

In the video, Anderson talks about having a sense of belonging within AEW. He loves having the opportunity to help put over the young stars within the promotion that he believes have a great future ahead of them

In the video, Anderson talks about feeling like he belongs, and take the opportunity to put over the young stars within AEW who he believes have a great future.