On last night’s episode of AEW: Dynamite you would have seen both Billy and Austin Gunn on screen. What you might not have noticed is that throughout the show AEW never referred to Billy Gunn he was only ever mentioned as Billy, Billy from the Gunn Club or Billy and Austin Gunn. 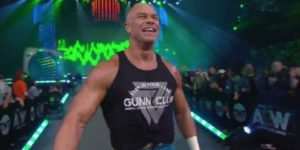 The reason for this is that WWE have blocked the use of his full name as his ring name. Until WWE say so, he is not allowed to use Gunn. Dave Meltzer had the following to say on Wrestling Observer Radio:

“Well, he is not allowed to use the word Gunn. I think the WWE lawyers got on him. So he is just Billy.”

It seems WWE loves making people have only one name so much, they have now extended their reach to AEW’s roster. So, it is just Billy.

Kipp Sopp (Billy’s real name) has a live trademark for clothing, footwear, headgear and other merchandise but not as an in-ring performer. He has a variety of Billy Gunn goodies on Pro Wrestling Tees. It is a all a bit unclear at the moment, but we can assume that the reason WWE can claim ownership of the name right now is that they possibly created the name. Kip Sopp made his debut with WWE back in 1993 alongside Bart Gunn as past of The Smoking Guns.

There seems to be a trend of WWE wanting AEW stars to perform under a single name considering Cody had to be introduced as Cody and Brandi Rhodes for so long. Looks like we are going to be hearing Billy and Austin Gunn for the time being.