Twitter can sometimes become a negative place for people. Recently its been full of COVID-19 worries, Black Lives Matter movement and protests and most recently the #SpeakingOut movement where wrestlers are tweeting about their sexual harassment, abuse and assault experiences.

It appears this has got all too much for Hangman Page from All Elite Wrestling. He is one of many wrestlers who have recently deleted their Twitter profiles. Athletes such as Young Bucks and Shawn Spears deleted took a break from social media but recently returned. There is no confirmation as to why Page took the decision to remove himself from social media. 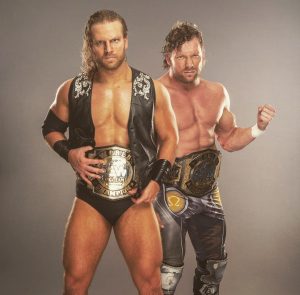 Page is the current AEW World Tag Team Championship alongside Kenny Omega. The duo won their tag team titles from SoCal and have been Champions for over 150 days. Recently they have defended their titles against tag teams such as the Natural Nightmare and Superbad Squad.

At the upcoming Fyter Fest, page and Omega are set to face up against Best Friends Chuck Taylor and Trent Beretta.

We hope that the deletion of his social media account is only temporary and we will see more of his Tweets soon.