One of AEW’s biggest stars has said that he “loves” WWE’s new concept that has been put in place to help boost ratings. He commented on the newly debuted ThunderDome arena which has been constructed in the Amway centre to allow fans to be in attendance through a video call. 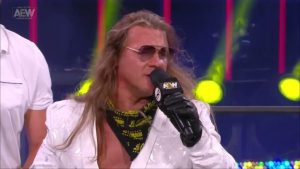 In his latest Saturday Night Live Stream, the Multiple time WWE World champion, Chris Jericho, addressed leaving the Performance Centre where all shows have been recorded from since the start of the Coronavirus pandemic. The former AEW Champion commented on how the change of venue could be a great idea from his former promotion.

Here is what he had to say regarding WWE’s new concept:

“I loved it, the presentation looked great. I think it’s great that the WWE got out of the Performance Center, it was really killing their vibe, it just looks like a warehouse, it has nothing to do… at least dress it up a bit or darken it. The ThunderDome looks cool.”

Chris Jericho was not completely full of praise for Vince McMahon’s new set up. He thinks that the arrangement for fans to be in attendance is a bit strange:

“The thing that was confusing to me was the fans behind them. They weren’t making a lot of noise, or maybe they couldn’t make noise or whatever that may be. It looked cool, but it’s also a bit weird out of like The Running Man or something you would see on Black Mirror. All of these faces behind you but they’re all on TV screens. Nothing takes the place of real fans and I’m really excited to have real fans at our show next week next Thursday, and we did it right.”

AEW are trying to bring back fans to their shows with 10% of their normal fans attending the next episode of Dynamite on August 27th. Fans that purchase tickets will have to sit in specific isolated pods so that they can safely distance from others.