MJF is one of the most impressive in ring performers and promo makers not only in AEW but in pro wrestling in general. He is a main event talent and at only 24 years old he has a massive career ahead of him. It seems he shares that sentiment by recently saying that he wants to wrestle until he is 70. 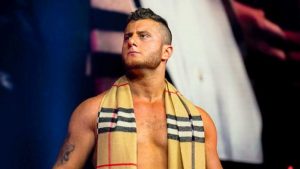 When saying this MJF is alluding to his in ring style. In a recent interview he said that his style of wrestling drastically contrasted that of the likes of Jon Moxley. He told Busted Open Radio that he doesn’t wrestle a car crash style and likes to take care of his body which he thinks will lead to his longevity in the ring.

“Nothing that came out of my mouth wasn’t something that wasn’t true, there was no hyperbole, it was all facts. I said ‘grab a calculator’ because ‘in facts,’ who is one of the top stars in wrestling? It’s Chris Jericho, my hat off to him. The man is 49. In 25 years from now, I will be 49. That is why I was so comfortable saying that. With the way I wrestle and my style, I’m probably going to be able to wrestle until I’m 70 and be on top.

I’m not being an idiot, I’m not doing what everyone else in my generation is doing, which is succumbing to this car crash style that dictator Jon wants us to succumb to. I’m not going to jump into that style because I want to make sure that I’m helping our company go from being the alternative, and I’m not saying I want to monopolize professional wrestling, that didn’t come out of my mouth, what I am saying though is I want us to be number one.

Dictator Jon studied the Ian Rottens of the world, the brain-damaged of the world. I studied the greats, the Flairs, Tullys, Ernie Ladds, Nick Bockwinkels. Those guys’ careers lasted a long time because they wrestled intelligently. They didn’t wrestle to garner a pop from the audience. I am wrestling to get the winner’s purse. I am wrestling to stay on top and be the top guy for the next 25 years, not the next two. It’s unfortunate that we have to see every Wednesday a bunch of guys clamoring for attention by hopping over the top rope or jumping off it.”

We are set to see MJF challenge Jon Moxley for the AEW World Championship ay all out. Moxley is likely to retain his title between now and then so it will be good to see them face off for the title. Moxley is set to take on Darby Allin for his title tonight and it would be a big upset if he were to lose.