In last night’s episode of Smackdown we seen an explosive opening segment in which we seen Jeff Hardy being arrested for a hit-and-run on Elias. Hardy was taken into custody by police but was able to escape to come back to the show in time for the intercontinental championship semi final match. Hardy was able to distract Seamus to help Daniel Bryan reach the final of the competition. 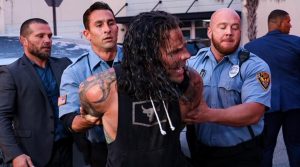 The story-line divided the opinion of fans online. Some fans say it was distasteful given Hardy’s recent history with DUI’s and his time in rehab. Others say it is the most gripping segment they have seen on WWE for a while.

Current AEW superstar and brother of Jeff Hardy took to Twitter during the show to voice his opinion. He clearly was not happy about his brother’s involvement with the police and emphasised how happy he was to have moved promotions.

I’m happy to be working at @AEWrestling for @TonyKhan on Wednesdays.

While Matt Hardy could just be sending a nice message to his current boss, some believe that he was expressing his unhappiness at his brother’s storyline that was playing out on SmackDown at the same time

Matt Hardy’s wife Reby Sky seemingly shared in her husband’s sentiment, tweeting at the same time of SmackDown that she was throwing her TV out. Again, this may have been about something else entirely, however, it seems like it could have been in response to WWE’s controversial Jeff Hardy storyline.

I’m throwing my TV out.