In the few years that All Elite Wrestling has been an official promotion, Fans have been desperate to have a video game created

Kenny Omega, AEW star and Executive Vice President, is an avid video game fan. He has teased that a game based on the promotion was being planned.

We now have conformation that a game is now in the production stage. Chris Jericho was interviewing AEW referee Aubrey Edwards where she mentioned the game. 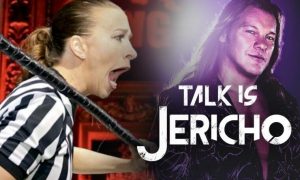 Aubrey appeared on the Talk is Jericho podcast and had this to say:

“I’m working on the AEW video game. I can’t actually talk too much about it. I don’t know what I can say. I mean, we’re very, very early on, there’s a lot of things that we’re talking about. I talk to Kenny a lot about what he wants out of it, but it’s definitely a ways out. I’m not gonna put a number on it because I don’t want the internet to get mad at me but…”

Before Aubrey became a full-time referee with AEW, she worked as a game developer. Being involved in both industries will give her great experience to personally work on the game.

The bad news is that games do take a long time to develop. Especially if AEW want to develop it properly. They will make sure that they do take their time to perfect it to avoid the glitches that WWE had with their 2K20 game.