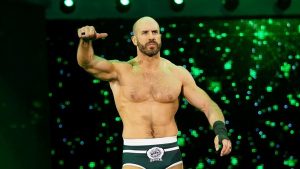 Cody Rhodes commented on the importance of Cesaro in WWE last week. The former WWE Superstar and current AEW Executive Vice President of AEW said that Cesaro was not only one of the most underutilised wrestlers in WWE but also on the planet.

The support for Cesaro was backed this week by AEW’s Arn Anderson. As part of a 2015 Extreme Rules review podcast, Arn discussed why he thinks Cesaro hasn’t been pushed to the top of WWE, despite his undeniable talent.

The former WWE backstage agent and Legend revealed that the WWE management don’t particularly like Cesaro despite being one of the best wrestlers on the roster.

Arn had this to say:

He’s not a favorite guy, as you know, of the front office, for whatever reason that is. They’re the only ones that know because everyone else across the planet seems to think he’s a Superstar.”

Although it has not been explicitly used as a reason for Cesaro being held back by WWE, he has been asked on numerous occasions to stop doing ‘impressive moves’ while working as a heel in the company. Management deemed the Superstars style as being too flashy and that the moves, although carried out perfectly, made wrestling look more fake.

“But he continued to get leaned on to stop doing all that stuff [impressive moves] as a heel. It was just too flashy and all that stuff.”

How good would it be if Cesaro was given a bit more creative freedom and was able to go on a title run?