NXT Superstar Adam Cole’s contract is due to run out in August according to Wrestling Inc. Already rumours are beginning to spread over his next destination if he does not re-sign with WWE.

The source suggest that Cole has two major options. He could stay with WWE and get called up to the main roster or he could always decide to move on to All Elite Wrestling.

If he was to stay with WWE then he would most likely sign for more money. After all he has been the main focal point within NXT for over a year now and has been a main event star since he got there. 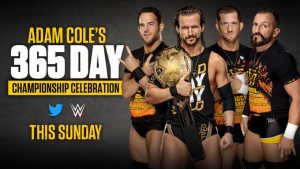 If he was to sign it would be expected he would make it onto the main roster but would Vince McMahon give him the push he deserves? Vince has a preference when it comes to stature. Many within the company have struggled to get over this size barrier, would Cole’s charisma and star power help him overcome his size?

The other main option for Cole would be to move to AEW. He has a lot of friends over in Tony Khan’s promotion including his Elite friends Kenny Omega and The Young Bucks.

Adam Cole’s girlfriend Britt Baker also works in AEW and she had this to say recently about her man on the AEW Unrestricted podcast.

“They’re all one huge, giant family, and I hope there is a day, in the near future, where Adam Cole can be in a ring with The Young Bucks and Kenny and Cody. It’ll all come full circle, and we can all be one giant, happy family.”

Size restrictions do not apply on AEW. Darby Allin is not a big guy but he is quickly becoming one of the main faces of the company. Lets not forget PAC who faced the glass ceiling at WWE but has managed to succeed in AEW

Cole could get lost if brought up to Raw or Smackdown so is a move his best choice?