Braun Strowman Successfully defended his Universal Championship against his former stablemate Bray Wyatt. Wyatt challenged the Champion in the few weeks leading up to Money in the Bank but was defeated in the pre-taped match for the pay-per-view. 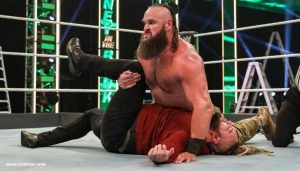 We have not seen Bray Wyatt or the fiend on TV since Money in the bank. Since then we have seen Strowman start a new feud with The Miz and John Morisson. Braun will have to defend his title against Miz and Morisson in a handicap match at next week’s Backlash event.

Ringside News is reporting that Bray Wyatt will return soon and will reignite his Feud with the Universal Champ Braun Strowman on the lead up to SummerSlam.

We could see Strowman vs Wyatt at Extreme Rules or it could be dragged out until SummerSlam. What we can be sure of is that the former Wyatt Family men will be clashing soon.

We would most likely be correct in assuming that Strowman will successfully defend his Title at backlash. Could we see Wyatt make an appearance then? If not, then surely the SmackDown episode after the pay per view event which takes place on June 19th.

It is also likely safe to assume that since Strowman defeated Bray Wyatt in their last encounter that Wyatt would this time release The Fiend on him. If Strowman does have to face The Fiend, then it would suggest his days as Universal Champion are numbered.