Luke Harper and WWE came to an agreement that allowed him to be released from his contract back in November 2019. In March 2020 Harper debuted as Brodie Lee in All Elite Wrestling.

The former Intercontinental and Tag Team Champ requested his release via social media, but it was turned down. Around eight months after his request WWE decided to let go the talented and under-utilised athlete.

While working for WWE, Lee was one of the most underappreciated members of the roster, and many fans hoped to see him in the main event scene like either of his stablemates Bray Wyatt or Bruan Strowman. However, the company seemingly never had any intention of properly pushing him.

While speaking to Busted Open Radio, Lee revealed exactly why he wanted to explore other opportunities and why he ultimately decided he wanted to stop working for Vince McMahon’s company.

“That’s the main reason why I didn’t want to be in WWE anymore because I knew those opportunities weren’t coming. No matter how hard I scratched and clawed no matter what I proved they weren’t coming. I wasn’t one of the chosen ones.

“Now here I am creating it myself, but now it’s like I know I’m great at professional wrestling. I know I deserve these spots. Now I have to show up and prove it to other people. So now there’s a certain pressure on me because I don’t have anyone to blame anymore. So now here I am in these spots I was in the main event last night. I’m in the main event next Saturday. The pressure is there now because now I have to prove it.”

During the same interview, Lee revealed that he has no hatred or animosity towards WWE. and discussed the idea the his AEW persona is based on Vince McMahon.

“Look, you take it however you want. I happen to be a fan of mafia movies, so that’s the way the character was portrayed for me. Like I said, I believe that the leadership style, the results speak for themselves. So, you people can take it any way you want. And trust me, I hear you. I hear everybody. But nothing was intentional. I have no reason to hate WWE. No reason to hate Vince McMahon, nothing like that. But you take it how you want.”

Like many who have moved on from the company, he most likely wanted more creativity and deservedly more interesting story lines.

Brodie Lee has an AEW Championship match against the current title holder Jon Moxley. The match will take place at Double or Nothing on May 25th. 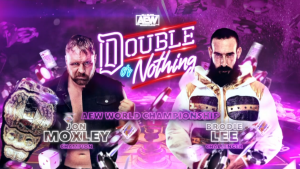