WWE’s Carmella and Corey Graves appeared on a livestream together and chat to fans on Instagram. For some reason Corey went on a bit of a tangent and described himself as being a panda in captivity during the lockdown. Yes a panda! 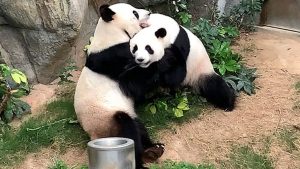 Weird analogy to have come to your head and it only got weirder as he explained that just like a panda in captivity, he had lost any desire whatsoever to have sexual interaction as a result of the lockdown.

Check the Cringy video below:

Well, this was awkward. pic.twitter.com/U5NrNGhErE

Unsurprisingly, as seen in the video, Carmella was visibly annoyed by the random outburst from Corey and it was brutally awkward for some minutes afterward.

Probably not the best choice of words from Graves, you can feel the tension build in the room as he tries to dig himself out the hole he put himself in.

We can only assume that this is not a discussion that the couple have had. Now, correct me if I’m wrong, but I don’t think the best way to charm your girlfriend who you are isolating with is to suggest you don’t feel like being intimate with them live on camera where everyone can see it.

I doubt that Carmella is ‘after the bell’ following this.