CM Punk took to Twitter to allegedly take a shot at former WWE Champion AJ Styles. He calls him out for his silence during the Black Lives Matter protests. Protests are taking place across the United states this week following the tragic murder of George Floyd at the hands of the police.

The former WWE star took to Twitter to call out celebrities and influencers for refusing to use their social platforms for good and speak out about the protests that are going on.

Lotta people snitching on themselves. When people tell you who they are, believe it. Might be unfortunate and disappointing if you’re a fan of that person, or if it’s your grandmother, but fuck ‘em. Good bye! (I yield my time, fuck you.)

A fan responded to his initial Tweet naming SmackDown Star AJ Styles as one of those who have stayed silent about the situation. Punk replied to this to suggest that he was not shocked over the silence of AJ Styles. The Tweet has since been removed but we have an image of the original below: 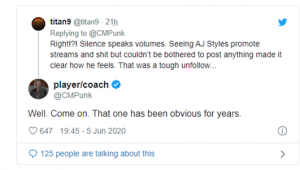 Its clear to see here that in no way is Punk overtly calling anyone racist here. What he is insinuating is that Styles does have a history of prejudice. Most WWE stars have used their social media platform to speak out about the atrocities happening right now.