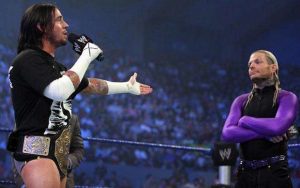 Jeff Hardy and CM Punk have had a long and exciting history in WWE. They battled for the World Heavyweight Championship back in 2009. During the Feud, Hardy’s history with substance abuse was a main part in their storyline. Now WWE were irresponsible to include Hardy’s recent DUI in last week’s SmackDown Episode.

In the Smackdown Episode we seen an explosive opening segment in which we seen Jeff Hardy being arrested for a hit-and-run on Elias. Hardy was taken into custody by police.

On last nights episode of WWE backstage CM Punk discussed the Hardy situation at length with the rest of the panel. Here is what he had to say, courtesy of Fightful:

“I’m speaking from experience because I worked extensively with Jeff. He, at that point, was not at a great place mentally and physically. My thing with this story is that somebody’s sobriety is very fragile and important. We talk about how Jeff is okay with it and he greenlit. To me, it is the responsibility to get in front of that, whether it be the company or a writer, and be like ‘no, we ‘re not doing that.’ Cleaning your life up and getting sober, we can champion that in many ways. You don’t put him in front of a moving car.”

Before the end of Smackdown, Jeff managed to make it out of police custody and get back to the performance centre to attack Sheamus.

Since the ‘arrest’ a lot of fans have taken to social media to express their feelings of distaste on WWE’s part. Some have also said its good for story lines to be a bit more hard-hitting.

As mentioned, Hardy’s feud with CM punk was brilliant. They even ended up winning Wrestling Observer Newsletter’s Rivalry of the Year Award back in 2009.