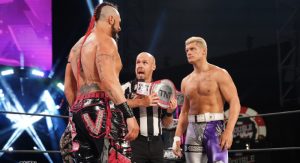 At this week’s AEW pay per view Double or nothing we seen Lance Archer take on Executive Vice President Cody in the final of the TNT Championship. Before the evening it was widely believed that Archer would walk away with the new title belt due to the fact he was dominating the main roster, however, it was Cody who picked up the win in the marquee event.

Lance dominated for most of the match, so much so that fans questioned the win. following the show, people have questioned whether AEW made the right call in having both Brodie Lee and Lance Archer defeated in their AEW pay-per-view debuts.

After the show, Cody spoke to the media and revealed that Lance is one of the three best opponents he’s had the pleasure of sharing the ring with. However, after saying that, Cody would go on to add that he did not always think this and was initially anxious about AEW signing the former NJPW star:

“The recruitment of Lance Archer to AEW, Tony Khan and QT Marshall, they were really the ones were on that search. I questioned that search and I have no questions anymore. He’s one of the top three opponent I’ve ever had. I cannot wait to step back in the ring with him. A freak hybrid drug-free athlete — the things he can do, that’s what you want.”

Lance Archer is 43 years old. For someone of his size and age, he should not be able to move the way he does inside the ring. If you have not seen the Cody vs. Archer match from Double or Nothing, it is well worth watching. One of the best matches we have seen in a while