Cody, AEW’s Executive Vice President and current TNT Champion has taken to social media to challenge homophobic comments made towards his next challenger Sonny Kiss. 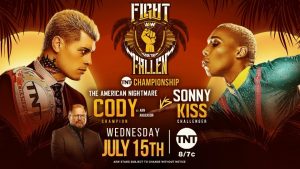 Kiss will face Cody for his TNT Championship at Fight of the Fallen which will take the place of AEW Dynamite this coming Wednesday. AEW have launched the event in support of all those who have helped during the COVID-19 pandemic.

On Twitter this week Cody used his account to promote his match against Kiss. Unfortunately, Cody then had to respond to a homophobic reply to his Tweet. Check out his response below:

This is terrible. And you’re not worth the signal boost.

But I’ll make this clear to fans worldwide.

If you have a problem with a gay man receiving a title shot, you can kiss my ass.

I’m proud to share the ring with Sonny. https://t.co/ZNkTZ29rRb

The original moronic Tweet has thankfully since been deleted. Homophobia, or any kind of discrimination has no place in wrestling or anywhere in society for that matter. Many journalists, fans and fellow wrestlers have replied to Cody’s response in support of his comments.

AEW are known for being a current and diverse promotion. It is great to see Cody stick up for his fellow athlete against idiotic internet trolls.