On last weeks episode of AEW’s Dynamite, the introduction of a Casino Ladder Match was added to the pay per view card. The Ladder match is to take place at Double or Nothing on May 23rd and we can now reveal more details on the rules of the match.

The match will include nine participants in total. Two wrestlers will start in the ring and will fight to reach a casino chip that will hang above the ring. The first man to pull the chip down will win themselves an AEW World Championship match.

The two participants will start the match alone, However, every ninety seconds another competitor will join the fight for the chip until all wrestlers have been released.

The chip can be pulled down at any point during the match which means that the competition could be won before all participants make it out to the ring.

So far AEW have confirmed the following competitors: 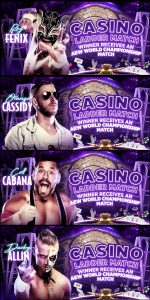 AEW are taking to Twitter regularly to confirm competitors of this exciting new concept. Stick with us to get up to date information on the newly named competitors.