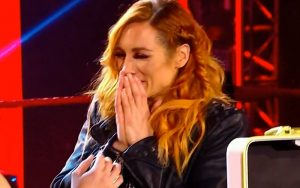 This week’s episode of Monday Night Raw featured the Return of Becky Lynch with a big announcement.

This helped the viewership increase for the first time since April. The Raw after Money in the Bank averaged 1.918million viewers which is up 232,000 from last weeks average of 1.686 million.

Becky Lynch returned to RAW at the start of the show with Asuka’s Money in the Bank briefcase in hand, which led to her giving Asuka the RAW Women’s Championship and announcing that she will be stepping away from the ring due to her pregnancy.

Though Lynch’s return didn’t bring the first hour of RAW back to two million viewers, it was the highest viewed first hour since the RAW after WrestleMania 36.

RAW’s ratings stayed consistent heading into the second hour, only losing 32,000 viewers. The third hour saw a bigger decline with 158,000 viewers tuning out for the Baszler-Natalya match.

It also seems that fans were not very interested in the return of Edge and Randy Orton as they planned a rematch at upcoming pay per view Backlash.

Hourly ratings are as follows:

According to ShowBuzzDaily RAW dominated Monday night cable beating programming on VH1, TLC, and Fox with 0.59 in the 18-49 demographic