In WWE right now, Drew McIntyre is on top. He has been WWE Champion since defeating Brock Lesnar at Wrestlemania and has since been successfully taking on all challengers. He has recently revealed that he has a goal that he would like to achieve in the near future.

In an interview with British newspaper, The Sun, he discussed that he wants a match with John Cena. although he has not been in the ring recently, Cena is still regarded as one of the biggest names in professional wrestling. Cena has ben focussing his time on Hollywood but did manage to make an appearance at WrestleMania in a Firefly Fun House match with Bray Wyatt.

Here is what McIntyre had to say about facing Cena: 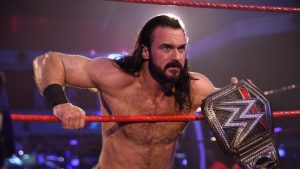 McIntyre and Cena have faced each other before, but only in tag team matches. Although they have both worked for the same company for a number of years, they have never faced each other one on one. For a long time the two were on opposing brands, and by the time McIntyre moved to Monday Night Raw, Cena was otherwise engaged.

If Cena were to return again for a match against McIntyre it would be a spectacle, however it seems unlikely. McIntyre is currently in a program with Randy Orton and is scheduled to defend his title against him at WWE’s upcoming pay per view SummerSlam.