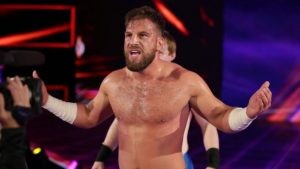 We reported last week that a former champion’s contract had expired, and he was free to leave the company. Drew Gulak let his contract run out last week and we assumed that his match against Daniel Bryan was the last we would see him performing for the company.

PWInsider has confirmed that Gulak has signed a new deal with WWE and will not be moving to any other promotion.

WWE and Gulak could not come to financial terms to extend the athletes contract but it seems discussions were ongoing, and they were able to agree on conditions.

Fightful also reported that Gulak had already recorded this week’s episode of SmackDown and his contract situation was not alluded to while filming.

If you make your way to the WWE website you will see that Gulak has been moved back to the active roster page instead of the alumni page. There is no word on how long the contract will last but its safe to say that Gulak is not moving for now.

When it was first reported that Gulak’s contract was up fans were playing the guessing game of where he should go next. Did he make the right decision staying with Vince McMahon’s company or should he have gone somewhere else?