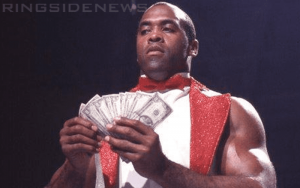 We previously reported that Vince McMahon has hinted to selling WWE and production companies such as ESPN and FOX were rumoured as interested parties.

If the global companies are interested in putting in a bid, they may have to battle with former WWE star Virgil who is most recently known as Soul Train Jones.

Apparently the former body guard to Million Dollar Man Ted DiBiase is able to get a lot of funds together as he tweeted saying that he is infact buying World Wrestling entertainment from Mr Mcmahon.

He seems to have the backing of another former WWE star as The Iron Sheik retweeted Virgil to support him.

I am buying WWE

We have no idea how Virgil is supposed to come up with the kind of money that McMahon will want for the company. Dave Meltzer stated on Wrestling Observer radio that they would be looking at a figure around five billion dollars.

It can be safely assumed that the comment from Virgil is tongue in cheek and he is just looking for attention. But it does raise the question, out of any current or former WWE stars who would be the strangest character to make changes to the company from the top?