Dustin Rhodes has been around wrestling for a long time. He has won 23 championships in total including united states heavyweight champion and tag team champion at WCW and at WWE he won intercontinental title, hardcore title nine times among many more. He has been in the ring since 1988 and still remains passionate about the business today.

He did however lose his passion for wrestling while he was at WWE. On AEW Unrestricted podcast he done in interview explaining his reasons why he left WWE.

“When you’re sitting at home for a couple of months with another company who doesn’t value you at all, and you’re sitting there knowing you have so much more to offer. You kind of lose you passion, and for the first time in my 31 years, I lost my passion for the wrestling business,” Dustin admitted. “I love wrestling. Came out of my mother’s womb wanting to be a wrestler, and we were raised that way. Dad wanted something different for me. He did not want me to go through the hardships that he went through, and I understand it looking back at it now, but I’m sitting there just knowing I have so much more to give.”

“They just will not give me the time of day, and I had enough. I said enough was enough, and for the first time, I kind of stood up for myself in a big way and said, ‘I am quitting. I am asking you for my release. I am done. I’m not happy here anymore,’ and you know how they do, they kind of make you wait for it.”

He was clearly unhappy where he was and he seen a fantastic opportunity to go join AEW where he could have a lot more creative input. He would then go on to have a match against his brother Cody at the All Or Nothing Pay Per View. 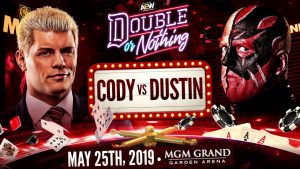 “It was getting close to Double or Nothing, and Cody called me. He said, ‘would you like to work a match with me?’ At first I thought we have tried this for years and years and years. “And they told us it was not good enough to be on the big stage. I heard that more than once. Every year. I tried. Cody tried. They didn’t see any value in it. So after years of that, I started thinking could it be too late for this match to take place? I am 50 years old. Could I give a performance for my brother Cody, for the wrestling world and the fans that I could be proud of? So I was nervous. I was scared.

“The competition is fierce right now. It’s very athletic, very fast. The talent are young, hungry [and] passionate, and here I am 31 years in the business. Of course I said yes to Cody, but I had that thing in the back of my head. I was very scared, very nervous how the AEW crowd would take to me because I had been WWE for so so long, and I heard they were different crowds. I was nervous at all kinds of things. I lived in my head for way too long leading up to that match.”

Cody and Dustin competed at AEW’s first show, Double or Nothing, in May 2019. The match was extremely emotional and garnered a five-star rating from Dave Meltzer. Dustin called the match perfection and one of his best matches of his career. He addressed the amount he bled during the match, and noted that he had gained back his passion for wrestling back after it was over. 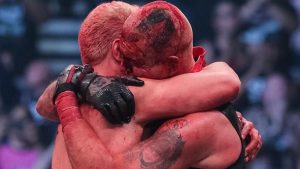 “In my opinion, it was perfection,” Dustin said. “I know Cody says it probably wasn’t his greatest match ever, and I understand that, but for me this was the tops. It topped everything that I’d ever done in the business. It was a special night. It was emotional.

“I did bleed excessively. I was very very worried about that, and Cody was worried about that. I’m sitting there, and I’m getting dizzy. It’s not stopping, and Cody’s like, ‘do we need to go? Should we go home now?’ And I’m like, ‘no, let’s do this.’ I was fine, but man it was just a gusher, and it was coming. It wouldn’t stop. I was very dizzy for a couple of days, but after that match, man it was like a weight had been lifted. After that moment right there, I had found my passion again.”

You can check out the whole interview at wrestlinginc.com