In last night’s episode of NXT Maverick face an uphill battle in the final of the NXT Cruiserweight Championship Tournament against El Hijo Del Fantasma. 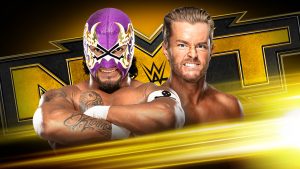 Maverick started well, going wild as he hit a series of quick moves to send his opponent out of the ring. Fantasma grabbed him for a Powerbomb on the floor that almost ended the match.

The masked superstar tried several different ways to win, from a Boston crab to another sit-out Powerbomb, but the underdog kept scrapping to keep himself in the fight.

Maverick saved his opponent from two masked men who interrupted the match with a massive suicide dive. This unfortunately allowed Fantasma to hit his finisher and win the title.

Maverick received a great reaction from the Superstars around the ring. He looked right into the camera and thanked the fans for believing in him. As he was about to leave, Triple H came out and presented him with a new contract. It was a fitting end to this story-line.

#WWENXT is the land of opportunity.

Since his release from WWE Maverick has been emotional and honest as to how much the company means to him. Since he was confirmed as being part of the cruiserweight tournament it had been rumoured that if he competed well, he would get offered another contract with the company, thankfully that is exactly what happened.

Maverick reacted to his new contract with this emotional Tweet

EXCLUSIVE: @WWEMaverick opens up his heart to the NXT Universe after an emotional night. #WWENXT pic.twitter.com/usmS5XmjR0