On last weeks post pay per view epsiode of AEW. We seen the long awaited debut of FTR. The tag team formerly known as The Revival in WWE came to the ring to save The Young Bucks from a beating at the hands of The Butcher and The Blade. 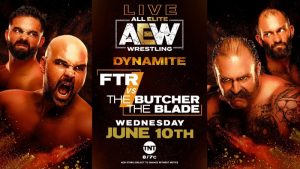 FTR are set to face The Butcher and Blade on next weeks episode of AEW. The duo revealed on an Instagram stream that they only have handshake agreements with the promotion and have not yet signed official AEW contracts.

Due to the fact there is no official contract between the promotion and the tag team, the duo will be able to take independent bookings once the Coronavirus pandemic subsides. During the stream they also name-dropped Luke Gallows and Karl Anderson as people they would like to work with.

There is no official word as to whether FTR are planning on signing official contracts. On multiple occasions they have stated that they would like to travel and work in Japan and UK. Due to the travel bans being imposed at the moment this has not been possible. It is likely that once these restrictions are lifted, we will see them appear in a whole host of shows across the world.

We will keep you as updated as always on any contractual information regarding FTR.