At this year’s WrestleMania we were scheduled to see WWE Hall of Famer and WCW Icon Goldberg defend his Universal Championship against WWE Star Roman Reigns. 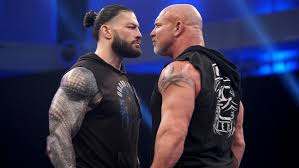 Due to the Coronavirus pandemic the match did not go as planned, infact the whole event did not go as planned with it having to spread over two nights with no crowd present. Roman Reigns made the decision to pull out of his match over safety for him and his young family. Braun Strowman stepped up and defeated Goldberg to become the new Universal Championship.

Reigns and Goldberg are no longer feuding as part of a WWE storyline, however, it seems Goldberg wants to continue to publicly trash talk Reigns in real life by callin him a joke.

In a recent interview on the American Monster Productions YouTube channel, Goldberg had some undeserved abuse to throw Roman’s way for not making TV appearances during the COVID-19 outbreak.

“Roman… you’re a joke, first of all. Second of all, when he ragged on me about headbutting the doors and stuff, you know… I never really explained my whole thought process on that.

“For you guys to get the character that you got, I had to do certain things. Well, one of them was headbutt the door. Right? And that may, on the outside, look like a stupid move, but as I mentioned, we all weigh the positives and negatives, so it’s very positive to make it as violent as humanly possible, and as real as humanly possible, and all the negative is you lose a little blood and hey, man, you get another concussion and cut a week off your life.”