Sammy Guevara, One of All Elite Wrestling’s top stars has come under fire on Twitter after a past interview resurfaced. A clip in which The Inner Circle member from 2016 has made a lot of people angry regarding what he had to say about WWE Superstar Sasha Banks. 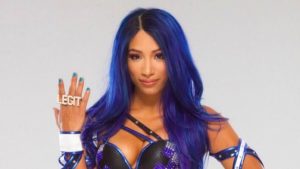 The Comment was made on Raw’s 4th Hour Podcast, his explicit reference was to an apparent affection he had developed for The Legit Boss while at a WWE Try-out.

Within the recording he said:

“Bro…Sasha Banks, oh my God…when I was at the WWE the other week I wanted to go f*cking rape that woman,”

The resurfacing of the horrible remark made him a trending topic today on Twitter as the intense fallout continues from the #SpeakingOut movement, in which we seen several women highlight sexual harassment, abuse and assault in the wrestling industry.

Many online demanded an apology from the up and coming star as he joins the list of high profile stars who are being confronted with past indiscretions that have ultimately led to a horrific industry wide culture of the mistreatment of women within wrestling staff.

Sammy did take to Twitter today to comment on his past behaviours, here is what he had to say:

I’ve made stupid, inappropriate and extremely offensive comments in my past. In my idiotic mind, I thought I was being funny in using words and terms that represent nothing but horror and pain. I am truly sorry for my hurtful words and actions, and I will never forgive myself.

Sasha Banks also put out a comment regarding the situation:

Some fans are demanding that Tony Kahn or other AEW representatives should be taking action on this situation but as of now AEW have not responded for comment on the remarks or the ongoing backlash. Maybe the fact that Sammy has reached out to Sasha and personally apologised for his extremely foolish behaviour, no more action while be required.