During WWE’s clearout referred to as ‘Black Wednesday’, we have seen over thirty members of onscreen talent and behind the scenes staff released from their contracts or put on furlough. The company made these decisions in a cost cutting exercise caused by the Coronavirus pandemic.

A Hall of Famer who was released by the company is expected to sign a new contract and return to WWE full time according to a report by WrestlingNews.co 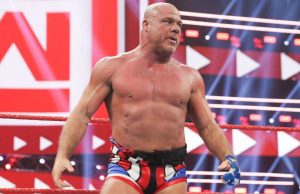 After being featured on the latest episodes of NXT and Smackdown this week, The site has heard from sources that ‘everyone expects’ Kurt Angle to re-sign with the company.

According to the report, someone on the inside of WWE said that “Vince doesn’t want to lose him to AEW” and “If they haven’t signed him already then they will make an offer soon”

Angle will most likely not be seen in any in-ring action due to his injuries so if he was signed by another promotion then we would never see him wrestle a match. Vince McMahon will sign him to make sure that he doesn’t make any appearance for a competitor even if it’s a non-wrestling role.