Hall of Famer Goldberg made a fantastic comeback to the ring in a WWE run between 2016-2017. During it he had an exciting feud with Brock Lesnar in an amazing match for the Universal Championship at WrestleMania 33. 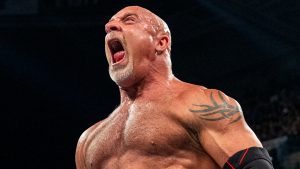 However, his more recent run within Vince McMahons promotion was less impressive. Fans were very vocal about how bad his performances were including his match against The Undertaker at Saudi Arabia. And lets not forget when he defeated Bray Wyatt’s Fiend to become the Universal Champion at the Super Showdown in Saudi Arabia. The decision to have him beating the unbeatable character of Wyatt undermined the run of the Fiend which was universally hated by pro wrestling fans.

For his latest run with WWE, Goldberg was booed and heckled by the majority of fans. In a recent interview with American Monster Productions, Goldberg spoke about the treatment from WWE fans:

It’s hard, it’s nerve racking. But I’m 53 years old now, things are different for me,” Goldberg said. “If I go out and a crowd boos me, I don’t take it personally and feel as if we’re not worthy of doing anything. No offence guys. There’s a lot of asshole fans out there. There’s a different generation of fans now, they want to be that guy that started that chant, and that guy that made Goldberg spit at them, or do whatever. I’m not here to give them the time to do that.

Within the same interview, Goldberg also called a Roman Reigns “a joke” which could or could not be lining up a feud between the two.

Check out the full video below: