Since the introduction of AEW we have seen a few WWE Hall of Famers make an appearance in the new promotion. Arn Anderson, Jake Roberts, Billy Gunn and Tully Blanchard have all been part of AEW both on screen and behind the scenes. 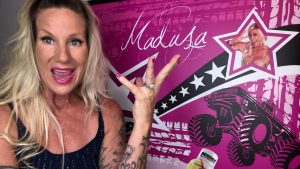 We have not seen the former WWF/WCW star wrestle a singles match since she faced Torrie Wilson on WCW Nitro back in 2000. She has however made an appearance in a Battle Royal in 2018 at WWE Evolution

Despite retiring almost two decades ago, Madusa has teased making an in-ring appearance with All Elite Wrestling following a fan suggestion on Twitter. Nyla Rose added to the speculation by saying she wanted to see Blayze in an AEW ring.

There has been no indication of anything official happening between Blayze and AEW so we may never see her actually step into a ring anytime soon. The Hall of Famer is getting on a bit in age so it would be more likely that we would see her manage a member of the women’s division like Arn Anderson or Jake Roberts has done.