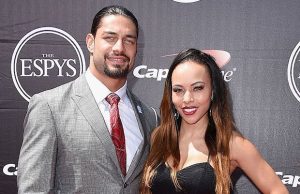 In a week of WWE news turning from bad to worse, we got some much welcomed good news. Roman Reigns has announced that he and his wife are expecting twins. Three kids already and two on the way for Reigns, soon he will be able to create his own battle royal in a ring!

Roman Reigns revealed in a Muscle and Fitness interview that his wife is expecting twins again!

“Three [kids], with two in the oven. I’m looking to be Papa Bear Five. Breaking news, we haven’t shared that.”

Roman reigns was the biggest name to pull out of Wrestlemania 36. He was scheduled to face Goldberg for the Universal title. Braun Strowman took Reigns place and became the new champion. Reigns has not been seen on TV since.

Roman Reigns likely pulled out of the bout due to the ongoing Coronavirus Pandemic. Rightly so considering he has a compromised immune system due to his recent battles with Leukaemia.

We can assume that part of the reason for him bowing out is due to the great news that we heard today. Hopefully he is having a relaxing time and isolating with his family to make sure his newly pregnant wife and children are healthy during this global outbreak.