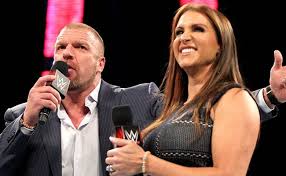 The landscape for TV programming tied to pro wrestling continues to expand. Not only do multiple networks air wrestling shows from numerous promotions weekly, we have also seen an abundance of WWE-themed spin-off reality shows on basic cable channels E! and USA such as Miz & Mrs. and Total Divas.

It was announced today that another WWE couple would be fronting a new show. American Tv Network A&E are releasing a new show starring Triple H and Stephanie McMahon called ‘The Quest for Lost Treasures’.

The Show will follow the couple as they travel across the United States to search for rare items of wrestling memorabilia from private collectors. Items from the careers of great wrestlers such as The Undertaker and Andre the Giant will hold centre stage. Fans of wrestling will also get a unique look into the WWE props archive in Stamford.

Quite simply, this sounds AMAZING. The full press release from Deadline is below:

A&E Network has greenlit the new series “The Quest for Lost WWE Treasures” (wt) in partnership with WWE Studios which takes viewers on the ultimate hunt to find some of WWE’s most iconic, lost memorabilia.

In each episode, WWE’s Stephanie McMahon and Paul “Triple H” Levesque, will lead a team of collectors, WWE Superstars and Legends as they investigate, negotiate, bid and travel across the country to hunt down and reclaim some of the most elusive WWE collectibles.

Throughout history, WWE’s action-packed storylines have spawned iconic, one-of-a-kind memorabilia, most of which is lost in attics, hidden in boxes or even claimed by competitors.

Guided by McMahon and Levesque, the series will unearth these rare items in the hopes of preserving and sharing the legacy behind the memorable moments in WWE history. Episodes will feature exclusive WWE footage as well as unprecedented access to the WWE Archives, which holds more than 10,000 rarities including Andre the Giant’s custom boots, Vince McMahon’s cement-filled Corvette, The Undertaker’s caskets and more.

Over the course of ten one-hour episodes, WWE Superstars and Legends will give viewers a unique look into WWE history as they seek out the missing treasures that have left a lasting mark on pop culture.”

What kind of Memorabilia would you love to see?