Former NXT Star Deonna Puzzaro made her debut on Impact wrestling last night. It is the first time we have seen her since she was released by WWE back in April. Purrazzo made a statement in her first appearance by attacking Champion Jordynne Grace.

Impact have teased signing multiple WWE stars since their unexpected release. The most recent being EC3 who mentioned on social media he would be joining impact.

The promotion also sent out a star packed promotional video to say that EC3, Rusev, Aiden English, Karl Anderson, Luke Gallows and Eric Young would be somehow involved in next month’s Slammiversary Show. 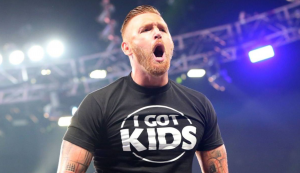 It seems that yet another former WWE star is being teased to Impact. In a backstage segment, Rhino teased that Heath Slater will be joining the promotion. Rhino said that he “already has a tag team partner”, and that partner “has kids”. This is obviously a reference to Heath Slater.

“I’ve already got a tag team partner, and HE’S GOT KIDS…” 🧐 pic.twitter.com/nzXkeT8IQH

This could be a massive signing for Impact. Reforming the popular tag team of Slater and Rhino would be great business. Let’s not forget that back in 2016 the duo became SmackDown Tag Team Champions.

As soon as we hear anything official, we will let you know