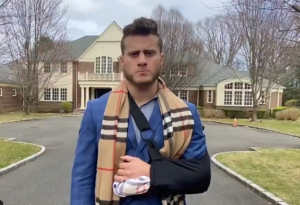 Maxwell Jacob Freidman (MJF) provided an update on his previously reported Injury. Last week MJF claimed on twitter that he had a life altering injury that may need surgery. This is the reason why the AEW star has not been involved in any inring inaction on the past few weeks of Dynamite.

Last week he took to social media to give the following news:

On last nights episode of AEW Dynamite he gave us an update on his injury before Wardlow, his bodyguards match. MJF provided the update from outside his huge mansion wearing a sling and a cast.

He had a hangnail, a small piece of skin beside his nail that is causing pain and discomfort has stopped him from any in ring action. He totally had us believing there was a serious injury. There may be an actual injury, and this is just his character trying to dupe us, or we were worried about him for no reason. Either way he totally got us going.