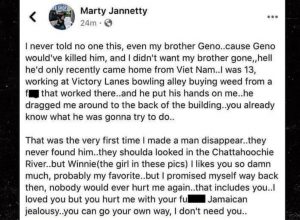 The post has since been removed from social media. The incident in question if there is truth behind it, would have taken place around the early 1970’s.

The report from TMZ states that the Georgia Police Department have said the following:

“We are going to look into this”,

A spokesperson from the homicide/cold case division said:

“The first step will be seeing if we have any missing persons or unidentified remains cases that match the limited information in the post.”

Since writing the post yesterday, Jannetty has refused to speak with TMZ, however, he has spoke with Boston Wrestling MWF to discuss the statement.

“We used to make fun of him because we knew he was gay, it’s known he was gay, he just never touched me before. We’re in the car, he grabbed me there, and I’m like ‘no, no, no.’ I have nothing against gay people, that don’t bother me, just don’t force the issue on me. He gently fondled me. I wanted to get out of the car and he got mad and angry. He jumped out of the car, grabbed me by my hair, I couldn’t get away. He’s dragging me to the back of the bowling alley and threw me to the ground and he was trying to pull my pants down. It was a brick laying there. What do you do when you’re 13? I can’t say he deserved to die, but he deserved to get his ass beat. When I was beating him in the head with a brick, I was only trying to beat his ass, I wasn’t trying to kill him. Can you imagine dragging a guy to a river and throwing him and then finding out on the news this guy is missing?”

Jannetty made the post yesterday and then spoke with Boston Wrestling MWF to discuss the statement.

As mentioned, Marty Jannetty had been approached by TMZ for an interview, but had been advised by friends to not do interviews or say anything on the matter, and his ‘Sheriff friend’ had told him there was a warrant out for his arrest.

We will keep you updated with any information regarding this unusual situation.