Chris Jericho was the first ever AEW Champion and has become one of the main faces of the company. The wrestling Legend spent almost two decades in WWE where he spent a lot of time with current WWE star Roman Reigns. 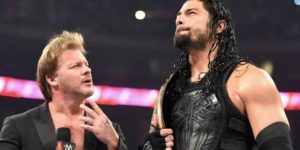 Le Champion and leader of the inner circle said recently that Reigns could be the biggest star not just in WWE but the entire industry if they just let him be himself.

Jericho explained to What Culture in a recent interview, why Reigns would be a top target for all wrestling promotions around the world.

“I’d put Roman Reigns at the top of that wishlist for anybody, Not only is he a great worker but he’s such a cool guy.

If they just let him be him he’d be the biggest star in the industry, for real.  That’d be a guy I’d love to get my hands on for sure.”

Reigns is currently not performing for WWE while the Coronavirus continues to plague the world. This decision was made not only to protect himself from the illness but also his wife and children. The decision totally makes sense considering the current situation at the company where an athlete has tested positive for the virus.

Whenever we see interviews from wrestlers that are discussing Roman Reigns it is always in a positive manner and Jericho is no different. Jericho believes if fans were let into Reigns’ real personality more, they would be able to understand who he really is.