One of All Elites Wrestling’s biggest stars and former AEW Champion Chris Jericho has announced on social media that Jim Cornette has been banned from watching all future episodes of AEW on TV. 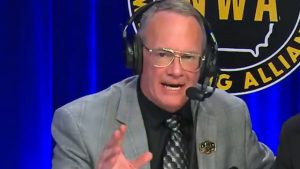 The ‘DemoGod’ took to Twitter today to announce that he has banned Cornette from watching future episodes of both AEW Dynamite and AEW Dark.

I am officially banning @TheJimCornette from watching any & all future episodes of #AEWDynamite & #AEWDark. He is under @AEWrestling suspension until further notice. Thank you. #DemoGod

AEW was launched a little over a year ago, since then Cornette has been extremely outspoken about his feelings towards the content AEW provide for wrestling fans.

Jim Cornette has a pretty old school mentality when it comes to wrestling and likes to make comments that catch people’s attention. He is particularly harsh on any light-hearted product that AEW put out.

Cornette has previously called Joey Janella a ‘waste of flesh’ and suggested that the fact that Nyla Rose is transgender should be used in order to get her heel heat.

Cornette has replied to Jericho’s Tweet referencing to the fact that he has been doing concerts with his band Fozzy despite the Coronavirus pandemic:

Chris I appreciate your consideration of my sanity, but I do it as a service to the wrestling fans. They need some measure of comfort in these cosplay times we're in. But don't worry–I NEVER watch "Dark".
P.S. Careful of the drooling bikers. #LittleBitOfTheVirus#COVIDGod https://t.co/MR5uv8kqBW

This is not the first time Jericho and Cornette have clashed and we are pretty sure it will not be the last.