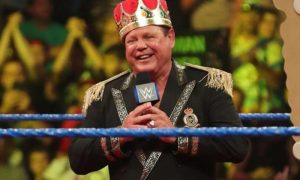 The win for Theory confirmed his place in next weeks qualifying match for Money in the Bank ladder match. Before Theory hit the ATl for the win, Tozawa provided some ariel action by hitting the former NXT star with a cannonball moonsault to the outside of the ring.

The clip below shows the arial move, lawler then reffers to the move as a “Ramen Noodle Moonsault”. This is aparticularly Racially insensitive description of the move considering Akira Tozawa is Japanese

Unsurprisingly, the comment did not go down well on social media with those watching the show. Several people have called Jerry out for a comment them deem to be ‘racist’. There is no word on if Lawler’s comment has landed him in hot water backstage within WWE. We will keep you updated with any developments on this subjec.