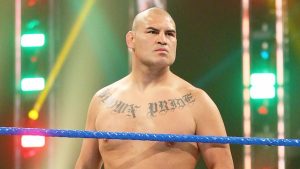 Almost two weeks ago, WWE underwent a cost-cutting exercise which seen many Superstars lose their jobs including Rusev, Luke Gallows and Karl Anderson. It has emerges today that another member of the roster has been quietly released.

Taking to Twitter, Alex McCarthy of talkSPORT is reporting that after just over six months with the company WWE has released former UFC Heavyweight Champion Cain Velasquez.

The former UFC heavyweight champ only signed a lucrative, multi-year deal last year. Given his usage, it appears he became easy to cut.

Cain was recently brought into WWE, reportedly rejecting a contract offer from AEW in favour of signing with Vince McMahon’s company in October 2019.

Velasquez’s first WWE match was incredibly underwhelming, with Brock squashing Cain in just over two minutes for the WWE Championship in Saudi Arabia at Crown Jewel.

Despite reportedly signing a multi-year deal just six months ago, Velasquez has seemingly been let go by WWE with this being his only televised match.

WWE  clearly had no real plans for Cain, and their desire to sign him was likely largely fueled by the fact AEW were also interested in his services.