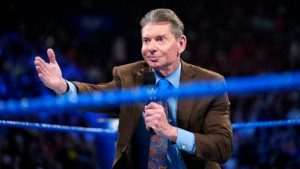 As we reported last week, the ratings for Monday Night Raw and Friday Night Smackdown have dropped significantly since they started shooting empty arena shows.

The writers are trying their best to write gripping story lines and make the in ring action as exciting as possible, but without the atmosphere of a live audience it has clearly put some fans off.

According to Vince McMahon, its nothing to do with the lack of crowd that is creating the ratings slump. He blames the drop of viewers on the the fact that Brock Lesnar is no longer Champion.

“As far as ratings are concerned, SmackDown has virtually been no change, very little. Raw has suffered, but not necessarily because of the environment. It’s suffered because we bring in a lot of new talent to Raw and it takes a while to get new talent over. We no longer have Brock Lesnar, obviously, but we have a new champion and a lot of new performers coming in… I’m convinced the Raw ratings will bounce back considerably.”

This makes no sense considering the ratings for Raw were already on a decline even when Lesnar was champion, so this is not the most valid excuse from Vince.

The Superstars who are currently going into work to perform for the live shows must feel extremely grateful for the fact that they are risking infection week in week out but still getting the blame for falling ratings. Way to back your staff Vince.