It is being reported that a major title change may be taking place within WWE next week. Just six days after SummerSlam, WWE have scheduled PayBack, another pay per view to take place from the ThunderDome.

WrestlingNews.co, are speculating that the current plan is to have Roman Reigns take the Universal Championship from Bray Wyatt, they added that the title change could happen as early as this week at PayBack. 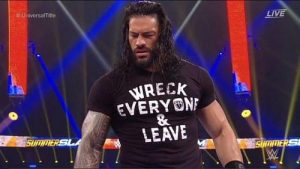 Here is what they had to say regarding the ‘Big Dog’s’ return:

“Reigns was supposed to win the Universal Championship from Goldberg at Mania. Now, the plan is for Reigns to take the title from Wyatt. The word going around backstage tonight was that the title change may happen as soon as next Sunday at Payback. It’s not clear if the plan is to do Wyatt vs. Reigns or a Triple Threat Match with Strowman involved.

It is great to see Roman Reigns return to WWE after being away for so long. It is also a good idea to see him in the picture for the Universal Championship once again. But surely its not the best booking of Wyatt if we see his Fiend alter ego drop the strap just seven days after winning it from Braun Strowman.

It is likely that Reigns will get another run at the title but surely it is too soon. Fans were not happy when Goldberg won the Universal title from Wyatt so easily after he had been set up to be an undefeated demon type character. Will WWE creative make the same mistake twice?