It looks like one of NXT’s stars have accidentally posted a massive spoiler for next week’s NXT Great American Bash episode.

Scheduled for next weeks show, Keith Lee the North American Champion is set to face Adam Cole the NXT Champion in a ‘winner takes all match’ with one competitor taking both titles.

Yesterday WWE recorded both episodes of the Great American Bash. One aired last night and the other is set to air next Wednesday. It now looks like we know who the winner of the Main event will be.

For a very brief time, Shaurav of the Indus-Sher Tag Team posted the following picture to social media before deleting it: 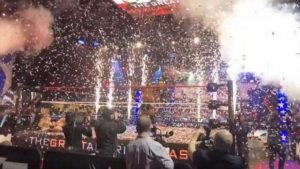 As you can see from the posted image, it looks like Keith Lee will Defeat Adam Cole to become the first ever Double Champion in NXT History. We fully understand that it is highly possible that two endings were recorded, one with each competitor winning. Maybe after WWE have seen this image was leaked, they will need to change things up a bit. One thing is for certain, we would not like to be in Shaurav’s position when WWE found out this was leaked.