WWE have recently been using friends and family of the company to fill out ringside to help add atmosphere to shows. One of those extras who has appeared on a recent taping has revealed that he has tested positive for COVID-19 on Twitter. 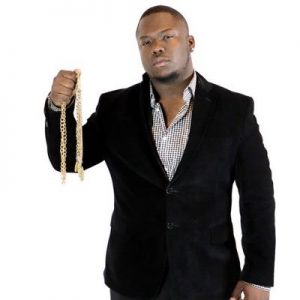 Manager from Major League Wrestling Tyreke explained that he had just been contacted by WWE to inform him that his recent test came back with a positive test. After WWE had another positive test from a staff member last week it prompted them to test everyone who had been in contact with that person or had been in the Performance centre at the same time.

‘The Ultimate Pusher’ from MLW added a second Tweet reaching out to Renee Young to ask advice about his currently pregnant wife. He is worried about any issues a positive result could cause. One of the tweets have since been removed but we do have an image below  to show what he had to say: 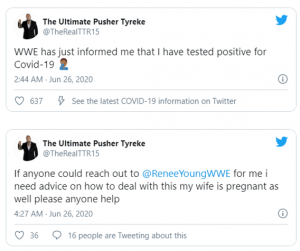 Since the mass testing from WWE we have seen a few names come out and confirm that they have tested positive for the virus. Some reports are suggesting that more than twenty people tested positive in the latest round of testing but we have co confirmation of official numbers.

Since the beginning of the pandemic WWE have been widely criticised of how they have handled the situation. The more positive tests that are confirmed the more it shows how little the company cared about the health and wellbeing of their staff. From the beginning of recording shows AEW officially tested every member of staff entering the building, WWE took peoples temperatures and hoped for the best. Clearly that has not worked out well for them