Mick Foley is becoming well known for being a social activist. He always stands up for people and for what he believes in. he has taken this one step further today by sending out a message to Donald Trump the President of the United States. Foley took to Twitter to send a message asking Donald Trump to take just 33 seconds out of his busy day to watch his video.

Within the video Foley revealed that he himself had just received Coronavirus test results. The results came back negative, However Foley wanted to point out that it took eleven days to get the results back. He explained that if he had been exposed to the virus in the eleven days between the initial test and getting the results then those results are useless. He asked Donald Trump directly to speed up the testing process.

Mr President, we have a testing problem. Can you please take 33 seconds out of your busy day to watch my video?

Here is what Foley had to say if you do not want to watch the video:

“Hello, Mr. President. This is Mick Foley, a fellow member of the WWE Hall of Fame Class of 2013. I just got back my coronavirus test results and it was negative but here’s the thing, Mr. President, it took eleven days for me to get that result, which means that result right now is fairly useless. So, I would like to ask you, from one Hall of Fame member class of 2013 to another. Mr. President, can you ask your people to speed up the testing please?”

Let’s hope Mr Trump took the time to watch the Wrestling Legend’s video. Asking for quicker results is not outwith the realms of possibility. In the UK for example many tests are taken and the results can be back at the patient within 24 hours. 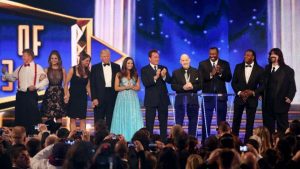 He referred to Trump as a member of his class. Its hard to believe back in 2013 both Mick Foley and The Presidents of the United States were inducted into the WWE Hall of Fame in the same ceremony. Others who stood alongside them at the induction were Booker T, Bob Backlund, Bruno Sammartino and Trish Stratus.