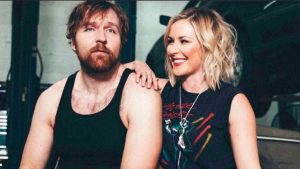 For those who aren’t aware, Renee Young is married to AEW World Champion Jon Moxley. The pair met while both under contract with WWE and got married in 2017.

While Moxley (formerly Dean Ambrose) left WWE last year to go join All Elite Wrestling, Young has stayed with the promotion, moving away from her role on SmackDown’s commentary team to the host of WWE Backstage.

On a recent episode of WWE Backstage, Renee Young who filmed her portion of the show at home due to Coronavirus, was surprised by an appearance from Moxley. During one part of the show, as you’ll see below, Jon Moxley, the former Dean Ambrose, walks into frame with a dog to pester his wife, and Booker T and Xavier pop big for the cameo.

Wild card rules during the quarantine.

While speaking to PWInsider, Moxley revealed that him gate-crashing the call landed his wife in trouble backstage with WWE higher-ups.

Moxley did not go into too much detail about the incident for probably not wanting to get his wife into more trouble. Mike Johnson swiftly moved on to another question.

Recently we reported that Moxley and Young were both working from home but also taking time to ‘Get it on all over the house’. Keep it classy Moxley