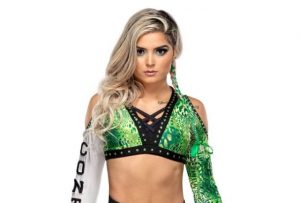 Over a week ago in a cost cutting exercise we had seen more than 20 WWE stars released from their contracts and producers and writers placed on furlough.

It wasn’t just main roster stars that were fired, NXT also released members of the black and gold roster. One of those stars were brazillian wrestler Taynara Conti who has made her first comments since being let go.

Speaking on her  YouTube channel Conti cleared up a few rumours that had previously been reported regarding her contract. She confirmed that roughly two months before the WWE releases, she had requested to get out of her contract but at the time it was not possible.

Check the transcription below by Fightful

“First of all, I want to say that I’m okay. I’m happy. I’m healthy. Most importantly, I’m so excited for the future. For real. So as you guys know, I don’t work for WWE anymore. I was with the company for two years and a half or so. A little bit more, yes? Honestly, that was like the most crazy and amazing opportunity of my whole life. I will always be grateful because WWE changed my life and For better, I came here to us and I [knew] no English. I had no idea what wrestling was before and after two years, I was in the WrestleMania ring. I had just two years of experience and I was in WrestleMania. I was the first Brazilian to be signed with WWE and the first one to step in the WrestleMania ring. I had so many cool moments and so many good feelings that I’m just grateful. I met so many good people [who are] special that I will have them with me forever for my whole life. So it was good.

“In the last couple months, I was not feeling like that anymore. I was not happy. As you guys know, I have a background in judo, so I’m always competing with myself and I need to feel that I’m growing, that I have space to grow, that I’m useful, and I was not feeling like that anymore. when I talked to them. We tried to figure it out and I was just not happy and I am like that. When I’m not happy. I tried to change, if I can’t change, *snaps fingers* let’s go, move on.

“I asked for my release about two months ago and they were not able to give it to me by then. And I had no option but to try again. Then in the middle of the pandemic, I was at home and I got a call. ‘Hey, Tay. Bye!’ They released me. Of course, it was a shock. I was upset. I was nervous. But, you know, now that I figured out everything, I’m happy because I want to have good feelings about WWE in my heart and I will always have it.”

The big question now of course is what’s next for Conti, who became the first ever Brazilian to appear on WrestleMania, now that she’s parted ways with WWE. 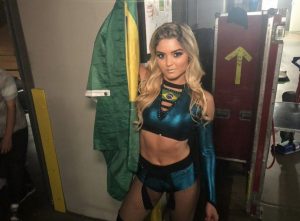 She added that she wants to explore further opportunities in wrestling, saying:

“But let’s talk about [the] next steps. I fell in love with wrestling, and every time WWE signed someone that came from the indies or from another company, I always asked questions. I was always trying to understand better. I am curious. I always need to feel that I have challenges and I always had, even for the coaches that I will miss a lot because we had great coaches in WWE and I learned a lot from them, I always said that I want to learn more. I want to know about wrestling more because I just know WWE and wrestling is much bigger than that and I know this. So, I always asked questions. I was always happy to learn more. Here I am! Free to know, to learn. I really, really want to achieve a couple of dreams, like go to Japan and wrestle in other places. So I’m really excited, but excited for the future, guys. I really am. But for now, that’s all. I can’t say anything more because I’m not sure about anything yet. But yes, I do have a couple of plans. Yes, I will be in the business and yes, I will be in the U.S. So thank you so much for your support!”

We at Mostly wrestling wish her all the best in the future!