One of the most talented athletes on the Women’s roster is Ember Moon. For reasons unknown WWE have refused to give her the push that she deserves on the main roster. She is clearly one of the top five most talented women on Raw and SmackDown. 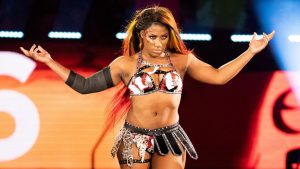 Her main use in the company so far is being an enhancement talent, she has been spending most of her time putting in great performances to get over more pushed stars.

Since September 2019, the former NXT Women’s Champion has been out of action. She ruptured her Achilles while participating in a 24/7 Championship segment and went under the knife soon after, though it was reported that Moon would be absent for a long, long time

Moon appeared on last night’s WWE Backstage and admitted that her injury could be severe enough to force her into an early retirement.

“I look back at my career in WWE, I’ve been here five years. Yeah, I could say, I should have been the one to defeat Asuka’s streak, or I hope that. I could say, aw, man, me and Bayley from SummerSlam, I wish I’d done more. The more and more I sit back and look at everything I’ve done and would re-do, I think about my injury currently. Realizing that I may have a career-ending injury. I’m coming back from the hardest injury and I might not have a chance to redeem myself of all the things I wanted to do and I want to do in my future. It’s so hard to think back and regret, when I try to look forward.”

“I keep looking forward and pushing forward because this is what I love. This is my passion, this is the only thing I’ve ever wanted for myself. And I want that opportunity to not look back, but to look forward and be better than ever before. It’s so hard to look back. It really is. I hope that I do have more matches. I’m going to prove to you guys that I’m worth redeeming those mistakes and those regrets. It’s just going to be awhile before I do so.”

It would be a massive shame if this injury were to spell the end of Moon’s career, as she has never been able to show what she can do on the main roster.

We hope this is just worst-case scenario, however you can see in the video that it is really affecting the former champion. We hope all goes well and she makes a full recovery to get the push she deserves.