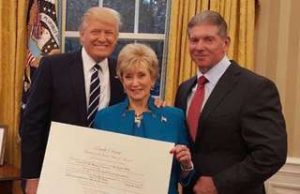 Is it a coincidence that WWE decide to start live shows instead or pre-recorded episodes just a day after Mrs McMahon’s Super PAC gives an $18.5m cash injection to the State of Florida?

Linda McMahon is using the Super PAC to try and re-elect Donald Trump and they donated the money to Florida on April 9th, just one day before WWE were deemed ‘Essential’

@JonAlba and @StephanieCNews put together an interesting timeline of events on Twitter to point out how the events impacted Live WWW shows:

Officials had previously stated that the decision to hold WWE shows in the state was that it was critical to Florida’s economy.

WWE has since released this statement, defending its decision:

.@StephanieCNews and I pieced together this timeline regarding #WWE:

I have asked how @WWE is "critical to Florida's economy": no audience, only essential personnel- what revenue is being generated and if so- how is it benefiting Florida residents and taxpayers? I'm waiting on @GovRonDeSantis office to respond. @MyNews13 #n13covid19

Remember that this news correlates with the fact that Vince McMahon has just been named as one of Donald Trump’s Financial advisors. Is seems the McMahon family’s politic affiliations have helped them return to business as normal during the Coronavirus Pandemic.