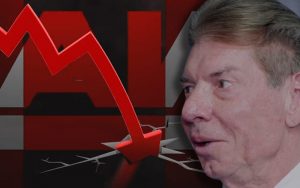 Seems to be a common occurrence now where we negatively comment on WWE ratings. This week is no different. This week’s episode of Monday night RAW drew the lowest overnight viewership in WWE history, even lower than last week.

The numbers dropped over 100,000 viewers from an average of 1.817 million to 1.686 million. Here is the hourly breakdown of this weeks show:

There are more important things going on in the world right now and people are trying to keep up with current affairs when watching TV but these ratings are the metrics by which WWE’s business are judged, and at the moment neither Monday night RAW or Smackdown are doing well.

Monday Night Raw last night was live from the Performance Center and featured Drew McIntyre vs. Murphy in the main event of the show.

It also had a last chance Gauntlet match with AJ Styles winning the last spot in this weeks Money in the Bank ladder match.

WWE are doing as much as they can to pull in viewers. The return of AJ Styles this week, The announcement of Edge and Randy Orton returning next week. Maybe next weeks show after a pay per view will bring in more viewers, especially if either of the Money in the Bank briefcases go to RAW competitors.